Samajam at the Santa Lucia International Festival in Monterrey 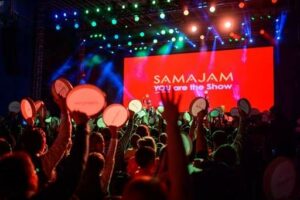 With a multicultural journey and a wonderful musical celebration for children, Samajam celebrated the 15th anniversary of the Santa Lucia International Festival at the Explanada de los  Heroes, where hundreds of families became part of their show.

The fun began with music and the familiarization of some English words such as numbers, colors and some commands such as right, left, down and up, which were chanted with great energy by the children.

The evening turned into a music classroom, as the artists began to play the musical notes and involved the families in using the musical instruments provided by the Festival at the beginning of the show.

The children also enjoyed a multicultural show as the members of Samajam performed a musical journey through the countries of Africa, India, Cuba, Japan, the Midwest, among others.

Samajam is a Canadian show in which the audience becomes the musicians, singers,} and actors, because it is a 100 percent interactive show, which was presented from October 10 to 27 at the Forito Santa Lucia, located in the open air stage of the Teatro de la Ciudad in Monterrey. 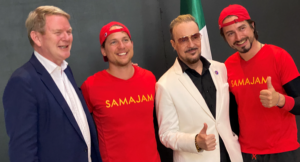